Dr Tiffany Jenkins is an author, academic, broadcaster and consultant on cultural policy. Her writing credits include the Independent, the Art Newspaper, the Guardian, the Scotsman (for which she was a weekly columnist on social and cultural issues) and the Spectator. She is an Honorary Fellow in Department of Art History at the University of Edinburgh; a former visiting fellow in the Department of Law at the London School of Economics and was previously the director of the Arts and Society Programme at the Institute of Ideas. She competed her PhD in Sociology at the University of Kent and divides her time between London and Edinburgh.

As a consultant she has advised a number of organisations on cultural policy, including Trinity College, Dublin; the Scottish government; the Norwegian government; the University of Oslo; Norwegian Theatres and Orchestras; and the National Touring Network for Performing Arts, Norway.

Her book Keeping Their Marbles: How Treasures of the Past Ended Up in Museums and Why They Should Stay There was published in 2016 to critical acclaim. She is also the author of Contesting Human Remains in Museum Collections: The Crisis of Cultural Authority.

Tiffany Jenkins appears regularly on Radio 4, including Thinking Allowed, ‘Front Row’ and ‘Saturday Review’ and Radio 3’s ‘Free Thinking‘. She presented the BBC Radio 4 programme ‘Beauty and the Brain’, which explored what science can tell us about art, and most recently wrote and presented A Narrative History of Secrecy, which was broadcast on Radio 4 in December 2016.

Tiffany hosts the acclaimed podcast Behind the Scenes at the Museum on which she interviews museum directors, curators, artists and activists about the big ideas rocking the cultural world.

She is also speaks regularly at conferences around the world and is an accomplished keynote speaker. 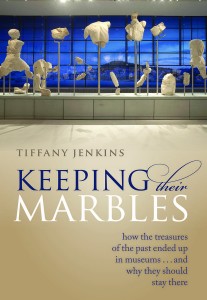 ‘Anyone who thinks that issues of cultural property and “repatriation” are simple should read this book. Jenkins elegantly explores the complexity of individual cases such as the Elgin Marbles and of the big overarching question: who owns culture?’ Professor Mary Beard

‘Tiffany Jenkins sets out a clear, compelling, and at times controversial case for museums as repositories and interpreters of the past…  There is much to agree with in this argument, and of course, much with which to disagree. That’s what makes this book a must-read.’ James Cuno, art historian, author, and President and CEO of the J. Paul Getty Trust

The sidebar you added has no widgets. Please add some from theWidgets Page