The fabulous collections housed in the world’s most famous museums are trophies from an imperial age. Yet the huge crowds that each year visit the British Museum in London, the Louvre in Paris, or the Metropolitan in New York have little idea that many of the objects on display were acquired by coercion or theft.

Now the countries from which these treasures came would like them back. The Greek demand for the return of the Elgin Marbles is the tip of an iceberg that includes claims for the Benin Bronzes from Nigeria, sculpture from Turkey, scrolls and porcelain from the Chinese Summer Palace, textiles from Peru, the Bust of Nefertiti, Native American sacred objects and Aboriginal human remains.

In Keeping Their Marbles, Tiffany Jenkins tells the bloody story of how western museums came to acquire these objects. She investigates why repatriation claims have soared in recent decades and demonstrates how it is the guilt and insecurity of the museums themselves that have stoked the demands for return. Contrary to the arguments of campaigners, she shows that sending artefacts ‘back’ will not achieve the desired social change nor repair the wounds of history.
Instead, this ground-breaking book makes the case for museums as centres of knowledge, demonstrating that no object has a single home and no one culture owns culture.

‘An outstanding achievement, clear-headed, wide-ranging and incisive … [Tiffany Jenkins’] book is timely. The enemies of enlightenment are strong. In March 2015, Isis bulldozed Nimrud; in September they destroyed parts of Palmyra. That the great national museums should safeguard their collections has never seemed more vital.’ John Carey, Sunday Times

‘Tiffany Jenkins.. marshals a powerful case (in nearly always jargon-free English). It’s a nonsense, she says, that ancient objects can be regarded as belonging to any country. Ankara has demanded that 4th-century BC sculptures carved at the Mausoleum at Halicarnassus by ancient Greeks for Persian rulers be repatriated. But there is no meaningful common identity between Anatolia then and now. In the case of the Elgin Marbles, [Jenkins] quickly dismisses the legal arguments for repatriation. She builds a more profound case about why the marbles should not be returned..The reader is left hankering for the confident, unbounded curiosity of 18th-century collectors such as Hans Sloane whose collection of more than 71,000 odd, rare and exotic items became the British Museum.’ The Times 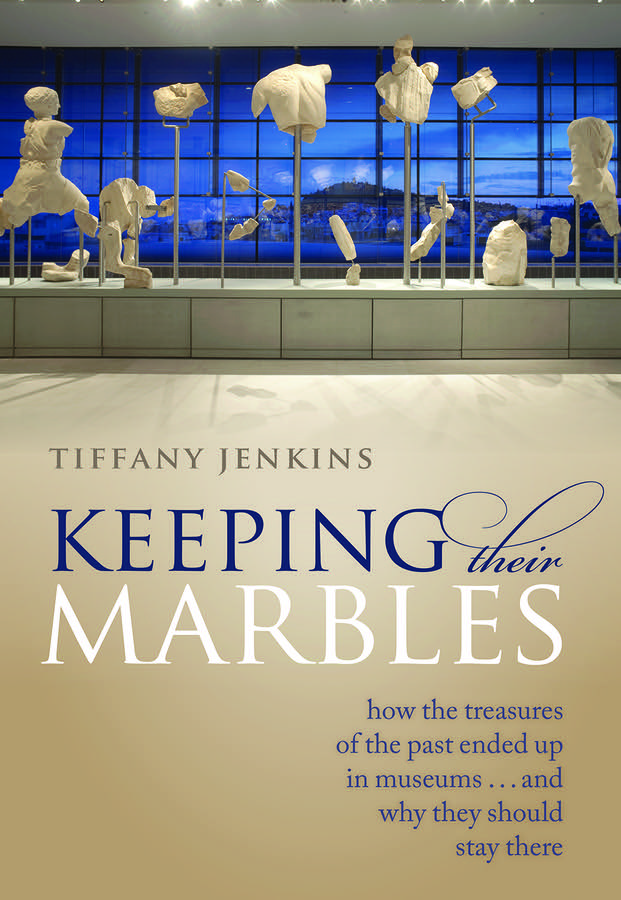