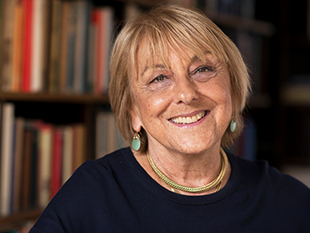 Lisa Jardine, who has died today aged only 71, was my teacher, my mentor, my client and my friend. I first met her almost thirty years ago at my university interview. I was nervous and self-conscious in my cheap sparkly suit, but was soon put at ease by Professor Jardine, who as well as being very friendly, had multiple ear piercings and purple hair.

Our paths crossed again and again in subsequent years — at an event in east London to encourage local kids to attend university; when I was a post-graduate at Queen Mary College; at various book parties — and each time, no matter how many months or years had elapsed since our last encounter, we picked up exactly where we had left off.

When I started TMA in 2014, Lisa was among the very first authors to get in touch and I was thrilled when she became a client. She wanted me to help with her next book, which was to be called Things I Never Knew About My Father. Her father was the charismatic genius Jacob Bronowski, whose book and television series The Ascent of Man had brought him worldwide fame. She was the first to acknowledge that ‘Bruno’, as she always called him, had made a huge impact on his brilliant and precocious daughter and that his influence had shaped some of the biggest decisions in her life.

Lisa loved Bruno and was delighted when Jesus College acquired the Bronowski archive (and when her friend Erica Wagner wrote about it for the FT ). But while filming the documentary My Father, the Bomb and Me for the BBC in 2012, her inchoate feelings about Bruno began to crystallize. ‘I realised’, she said to me late last year, ‘that the man on whom I had modelled myself for my entire life never really existed’.

For someone for whom words came easily, she found Things I Never Knew About My Father intensely difficult to write: it was to be a first-person journey into her own past, and required deep self-knowledge and a different kind of organisation to anything she had written before. But for the last year, she was completely energised by this unfolding story, which she built-up like a jigsaw, piece-by-piece. In that same period, she was made an Honorary Fellow of the Royal Society, an accolade that gave her deep pleasure (and threw into relief how absurd it was that she was never made a Fellow of the British Academy) and in June this year made an effervescent appearance on Desert Island Discs (when she declared that: ‘I only do things I love, and I love everything I do.’) What no-one listening knew was that only a few days before, she had been told that the cancer with which she had contended over the previous decade, had returned.

Lisa bore her illness philosophically, supported, as in all things, by her loving husband John. I last saw her two weeks ago, on 12 October. Although we both knew she was gravely ill, we did all the things we had always done. We gossiped; we talked about our families; about the news; about books and about her next book. And then we said goodbye.

I have never known anyone like Lisa Jardine, who I realise as I write this knew me in every phase of my adult life. She died before she grew old and I will miss her terribly.

The sidebar you added has no widgets. Please add some from theWidgets Page