Tim Adams is Lead Feature Writer at the Observer and the author of Being John McEnroe (Crown USA/Yellow Jersey UK). He has written cover stories for the New York Times magazine, Granta and Bloomberg Businessweek.

He received the One World Media press award last year and in 2014 was named ‘Arts and Culture Writer of the Year’ by the Foreign Press Association. 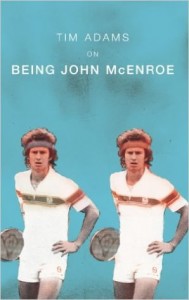 ‘Tim Adams is one of the best of our new sportswriters… Like the best essayists, Adams has the gift of informed digression and scatters fragments of autobiography throughout the text… Being John McEnroe is a book to be read while you queue for tickets outside the All England Club, but it will also reward more concentrated attention, not least because, at its best, it is an elegy for a vanished world.’ Jason Cowley