Bridget Nicholls is Founder and CEO of Pestival, an international festival dedicated to ‘Insects at the heart of human life’. It was described by the Guardian as ‘the Glastonbury of the natural world’.

The first festival at the Southbank Centre, London, attracted over 200,000 people and a global audience of 10 million. Pestival won the Observer Ethical Award for Conservation 2010. She is currently creating a touring Pestival experience supported by the Wellcome Trust for realization in 2018.

She conceived ‘Who’s the Pest?’, a month-long event series in collaboration with the Wellcome Collection and NOMA’s research lab. She also conceived, directed and produced the Axolotl Odyssey musical at the Natural History Museum for the Cultural Olympiad, 2012. She created the blueprint for Selfridges Projects Oceans Festival, showing how entertainment and luxury goods can be used for conservation education.

She is an authority on cultural entomology. A naturalist with a sense of humour, she has worked with top comedians such as Alistair McGowan, Sean Hughes, Sally Phillips, Russell Brand, Stewart Lee and Simon Munnery (with whom she was nominated for a Golden Rose and Perrier award). She has written for the recently published Hedonists Guide to the Art World alongside Rankin and Will Smith.

In 2010 Bridget was awarded the first International Zoo Art Fellowship of the Zoological Society of London, a role created for her. She has been voted a Woman to Watch – Cultural Leadership Programme 2010, has spoken at TED Salon London and was named CRZ Cultural Engineer by Honda (given to ten individuals for outstanding sustainable and ecological entrepreneurship).

She has worked for BBC2, The Discovery Channel, The Ecologist and BBC World Service and appeared regularly on BBC Radio 3 and 4 live debates with the likes of David Attenborough.

Bridget is an established MC and recently chaired and curated three live broadcast science/art debates during Frieze Art Fair; spoke at the Dutch Design Festival about how bats can help architects create a more sustainable city.

Bridget was brought up on an animal rescue sanctuary in Sussex where feeding Bengal eagle owls, finding peacocks in her bed and untangling frog-mating pile-ups was de rigueur. She is a descendant of Captain Kidd. 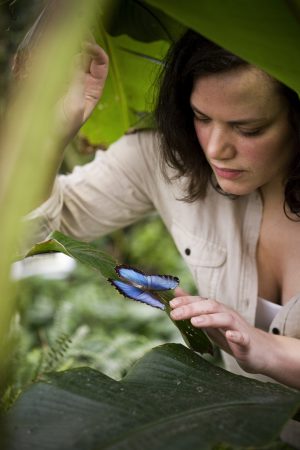