God and Mrs Thatcher: The Battle for Britain’s Soul

Demonised by the left and sanctified by the right, there has always been a religious undercurrent to discussions of Margaret Thatcher. However, while her Methodist roots are well known, the impact of her faith on her politics is often overlooked.

Eliza Filby’s new biography discovers the origins of Margaret Thatcher’s ‘conviction politics’. It explores how her  worldview was shaped and guided by the lessons of piety, thrift and the Protestant work ethic learnt in Finkin Street Methodist Church, Grantham, from her lay-preacher father.

In doing so, she tells the story of how a Prime Minister steeped in the Nonconformist teachings of her childhood entered Downing Street determined to reinvigorate the nation with these religious values. But as Filby concludes, this was ultimately a failed crusade. In the end, Thatcher created a country that was not more Christian, but more secular; and not more devout, but entirely consumed by a new religion: capitalism. In upholding the sanctity of the individual, Thatcherism inadvertently signalled the death of Christian Britain.

Drawing on previously unpublished archives, interviews and memoirs, Eliza Filby examines how the rise of Thatcher was echoed by the rebirth of the Christian right in Britain, both of which were forcefully opposed by the Church of England. Wide-ranging and exhaustively researched, God and Mrs Thatcher offers a truly original perspective on the source and substance of Margaret Thatcher’s political values and the role that religion played in the politics of this tumultuous decade.

‘Eliza Filby’s brilliant book adds a rich new dimension to our understanding of Britain’s most important peacetime Prime Minister and, as such, is a gripping read. It also makes us reassess the role that personal faith and private conviction play in the unfolding of history. The début of an important voice in the study of history and intellectual biography, God & Mrs Thatcher is absolutely not to be missed.’ Matthew D’Ancona

’In this thoroughly researched and thoughtful study, Eliza Filby demonstrates that previous biographers have underestimated the extent to which her politics were rooted in her religious faith.’ John Campbell, Independent

‘Eliza Filby subtly relates Grantham Methodism to Mrs Thatcher’s 15 years of leadership… Her book is welcome and rare. Far too many writers attitudinise about Margaret Thatcher (for and against) rather than studying her. I doubt the author likes Thatcher much, but all the more credit to her that she makes a fair-minded effort to understand what she believed about God, and how she succeeded and failed in applying her beliefs.’ Charles Moore, Spectator

‘There have been plenty of biographies of Thatcher but no other writer has taken quite such an imaginative approach.’ Tablet 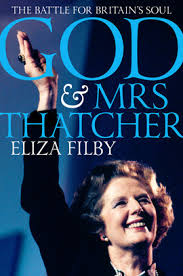