A revolutionary new account of the incredible life of Richard Sorge – the man John le Carré called ‘the spy to end spies’, and whose actions turned the tide of the Second World War.

Sunday Times Book of the Year

‘gloriously readable… Every chapter of Matthews’s superb biography reads like something from an Eric Ambler thriller.’ -DOMINIC SANDBROOK, The Sunday Times

‘Sorge is a legend in intelligence history. More than 100 books have been written about him… This latest, by Owen Matthews… is undoubtedly the best: detailed, wry, sympathetic and occasionally oddly moving. An Impeccable Spy is the first to be written with access to Russian intelligence files, and finally breaks open the enigma of the man described by John le Carré as “the spy to end all spies”… This is a superb biography, alive to Sorge’s human flaws as much as his professional competence, and with a salutary vein of anger running through it.’ – BEN MACINTYRE, The Times

‘Owen Matthews tells the story of Sorge’s extraordinary life with tremendous verve and expertise and a real talent for mise en scène. Shanghai in the 1930s and prewar Tokyo, Sorge’s stamping grounds, come vividly alive in these pages and the portrait of Sorge himself that emerges is richly authentic, giving real credence to the title’s unequivocal claim: for all his feet of clay, Richard Sorge was indeed an impeccable spy.’ – WILLIAM BOYD, New Statesman

‘Owen Matthews… is the first to use newly available sources in the former USSR, including KGB archives. It is a vividly told story, thoroughly researched and well-crafted… I love a thrilling spy story, especially one as superbly narrated as this, full of Bond-like drama about Sorge’s brushes with death, his love of fast cars and women.’ – VIKTOR SEBESTYEN, Financial Times

‘Though much of the detail is already well known, thanks to the detailed confessions of Sorge and his confederates after their arrest by Japanese police in late 1941, Matthews adds two important elements: more about the Soviet side of the story that he has gleaned from archives in Russia (particularly the military intelligence archives in Podolsk); and a convincing portrayal of Sorge’s inner life… with this clear-eyed, deeply researched and finely judged portrait.’ – SAUL DAVID, The Daily Telegraph

‘Owen Matthews captures all the drama of Sorge’s story, and he has mined Russian and Japanese archives to provide his readers with what is now the standard work on Sorge… With this book as our evidence, we can say that Sorge was an impeccable spy, and also that Matthews is an impeccable biographer‘ – VIN ARTHEY, The Scotsman

‘Matthews has few illusions about his subject — ‘a bad man who became a great spy’ — or the challenge that he faces in exhuming him… Drawing on the Soviet military intelligence archives in Podolsk, Matthews tells ‘for the first time’ the Soviet side of this eye-rubbing story.’ – NICHOLAS SHAKESPEARE, The Spectator Lead Book Review

‘What we have here is a superbly told, utterly implausible-but-true story that spans wars and continents and mounts in absurdity and suspense and hilarity until the reader is forced to pause and rub eyes in disbelief.’ Melik Kaylan, Forbes 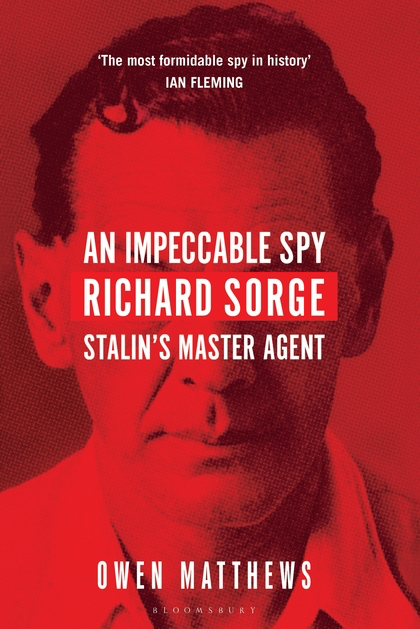